Under the headline ‘Gay marriage vote must be accepted: Abbott’, 27 September 2016, the popular news website news.com.au informed its readers:

Former Prime Minister Tony Abbott has issued a message to politicians on all sides of parliament about a proposed national vote on same-sex marriage: whatever the people want must be accepted.

Despite his strong views against legalising same-sex marriage, he’s prepared to vote with the people should they say yes.

“This is a matter that is properly for the people and if the people vote for change, the parliament has to accept it,” he told 3AW on Tuesday.

“Individual members of parliament have to accept it.”

Equally, he hopes same-sex marriage supporters will do the same if the country votes no.

The proposed plebiscite won’t be binding and several coalition MPs have indicated they’ll vote no regardless of the result.

One wonders whether news.com.au has correctly paraphrased what Abbott said. If past media reports are any indication, Abbott is here talking about the politics of the issue of homosexual ‘marriage’ and not about its morality, his views of which have not changed, as the report indicates. It is not the first time that a media report has implied that Abbott has compromised his moral views. The report prompted friend Peter Janssen to comment:

‘I think this position is quite wrong, although I can understand the tactical reasons for it. I can’t bring myself to reconcile the whole push for ‘direct democracy’ on this issue with (a) a natural law perspective, in which the fundamental nature of marriage should not be treated as if it were open to be determined by any human law and (b) a conservative philosophy of government in which the appointed legislators should exercise their own considered judgement rather than referring things back to ‘the people’ as somehow a higher tribunal.’

Peter has raised some substantial points that need to be addressed. To deal with point (b) first, plebiscites and referendums are part of our Westminster system of government although their use in practice is uncommon and reserved for a particular set of circumstances. The Parliamentary Education Office says that ‘a plebiscite (also known as an advisory referendum) is used to decide a national question that does not affect the Constitution. It can be used to test whether the government has sufficient support from the people to go ahead with a proposed action. Unlike a referendum, the decision reached in a plebiscite does not have any legal force.’

There have only been two national plebiscites and they were used to decide the question of conscription during the First World War (1916 & 1917). It seems to me that the two conscription plebiscites give a clear indication of the nature, use and appropriateness of a plebiscite as a rarely used instrument of government.

To justify a government’s resort to a plebiscite, an issue must be uncomplicated, directly personal, and of great moral and political import. One considers the issue so vital to the moral interests of the citizen that it cannot be left solely to the Member of Parliament who may not share the constituent’s views on the matter. This is certainly the case with the proposed plebiscite on ‘same-sex marriage’. Unfortunately, there are members of the Liberal Party who we would consider far from conservative and could not be relied upon to represent issues that are of fundamental importance to the conservative. If it were to come to a vote, the agitation for a ‘conscience’ vote in the Liberal Party would probably become too strong for Prime Minister Turnbull to resist.

In this way I can reconcile the resort to a plebiscite with a conservative philosophy of government. This is dealing with the political question of same-sex ‘marriage’, not with the moral and natural law issue.

Point (a) concerning the natural law is more complicated. I actually dealt at length with this issue in my presentation Abortion, same-sex ‘marriage’ and the exercise of prudence in my talk of April 2013. My talk provoked a vigorous discussion among the meeting’s attendees. It was another media attack on Tony Abbott’s moral views that prompted me to respond. In that talk I made a distinction between the politician with his commitments as a member of parliament and the person called to make a moral judgment in his role as an individual and citizen. The politician must work within the system of government to achieve a balance of good over evil. To achieve that balance he must apply his prudential judgment. I discussed in detail the nature of the political good and the application of prudence. At a political level, compromises must be made in most issues especially where there is a sharp difference in views. It is politically better to achieve even a wholly unsatisfactory compromise than to be comprehensively defeated with the result that the worst policy has free rein. There two pertinent quotations from Burke on this point:

Political reason must tolerate evils not because it is indifferent to it but because ‘public spirited prudence’ sometimes demands a ‘compliance with the impracticable nature of inveterate evil.’
On the State of Ireland (1792)

Toleration being a part of moral and political prudence, ought to be tender and large… A tolerant government ought not to be too scrupulous in its investigations; but may bear without blame, not only very ill-grounded doctrines, but even many things that are positively vices, where they are adulta et praevalida (grown/mature and very powerful). The good of the commonwealth is the rule which rides over the rest; and to this every other must completely submit.
Letter to Hercules Langrishe (1792)

The individual on the other hand has no such political constraints. The morality on such crucial issues as abortion and same-sex ‘marriage is clear and the individual is obligated to show not a trace of compromise. I described this position as the priest’s stance as opposed to the politician’s stance. The faithful priest must be prepared to die rather than compromise the teaching of the Church and fundamental principles of morality both of which cohere. The individual’s efforts to convince his fellow citizen of the evil of abortion and same-sex ‘marriage’ must be unrelenting until his society has enough democratic power to change the legislation. What then does this mean for the plebiscite and its outcome?

Supporters of same-sex ‘marriage’ are desperate for a vote in the houses and not for the Irish plebiscite resolution that achieved legalizing same-sex marriage in Ireland because it is not certain that a majority of Australians will vote in support of a change. I must note here that the desperation is evident in the unrestrained abuse of all opponents as bigots and hate-mongers. Cartoonist Bill Leak has given a bitingly accurate portrayal of the gay forces for change. 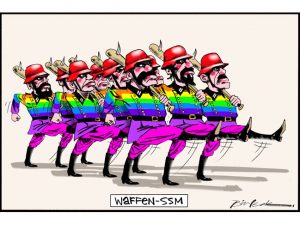 If Prime Minister Turnbull keeps his word and prevails in his undertaking to hold a plebiscite, how is the Burkean conservative to deal with a win for a legislative change? If one has chosen a plebiscite in preference to a member’s vote to resolve the same-sex ‘marriage’ issue, then one has created an obligation to accept the result. But it is the political result that must be accepted as a result of the contract. No human law, no contract between whatever groups or individuals can change the objective moral law. Burke was explicit about moral obligation and majority vote:

And the votes of a majority of the people, whatever their infamous flatterers may teach in order to corrupt their minds, cannot alter the moral any more than they can alter the physical essence of thing .
An Appeal from the New to the Old Whigs (1791)

Accepting the political outcome of the plebiscite does not conflict with one’s moral judgment and is no impediment to continue to enunciate one’s moral views and to use the avenues of our democratic system to organize to have the law overthrown.

There is one thing that we can be sure of if the result of the plebiscite goes against the same-sex ‘marriage’ faction. They will redouble their efforts to legalise same-sex ‘marriage’, employing every Alinsky-style tactic to defeat their opposition. Equally, if they win, they will proceed to the next step of the Marxist campaign to destroy every last vestige of traditional sexuality morality. If the ordinary person does not see the connection of the same-sex marriage campaign with the endgame of the Safe Schools Coalition program, then they should undeceive themselves. It is the one continuum.