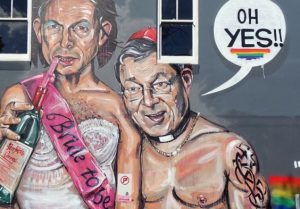 The photo above is a cropped photo of a mural on the wall of Botany Bay Hotel Newtown. The most offensive part of the mural has been removed. The full mural was posted with much admiration and approval by Nick Connellan on Melbourne Broadsheet.:

A slow clap for Scott Marsh, if you please. The artist has delivered some savage murals over the past few years…But this? This might take the cake, simply for how quickly it went up. Marsh finished the mural less than an hour ago, after starting on the back of the Botany View Hotel in Newtown at 6am yesterday. “I was pretty confident it would be a ‘yes’ vote,” he says.

If not, he says he had some minor alterations prepared to change the message accordingly. We don’t know what those alterations were, but we have to say, we kinda like it the way it turned out.

Connellan was not the only one to express unrestrained admiration for the mural and its intention. The twitter of the mural has scored to date 4500+ likes and 240 comments mainly from the type in today’s Australia that expresses the most extreme bigotry.

These are people who would crowd around the scaffold sucking on beer cans and moronically yelling obscenities if a Christian was a about to fall.

The persecution is gearing up.