‘AUSTRALIANS’ right to freedom of speech has been called into question with a commercial printer’s refusal to print a book written by Toowoomba family doctor David van Gend on the same-sex marriage debate.

‘President of the Australian Marriage Forum, Dr van Gend’s book “Stealing From A Child – the injustice of ‘marriage equality'” claims “to lay bare the subversive ‘genderless agenda’ that comes with genderless ‘marriage’.”‘ Read on 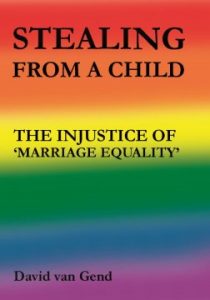 Marriage has always been about children, for the simple reason that children are the usual result of the male-female sexual union. If human sexuality was not reproductive in nature, the state would have no interest in the institution of marriage. But it is, so the state rightly does care about marriage.

Thus children are the reason for marriage, and it is their wellbeing that we should primarily be concerned about. However the push by adults to redefine the institution of marriage shows a callous disregard for the rights of children, especially their fundamental right to have their own biological mother and father. Read on