The one-world-governors in their own words. But, still, the delusional will deny it.

Billionaire George Soros driven by his unquenchable hatred is in an eternal battle with Christian/European civilisation. Soros belongs to a group of left-wing billionaires who have spent their lives working to dismantle 1500 years of Christian/European civilization. They have booked success after success over the last fifty years. With the Corona virus, Soros thinks the pandemic has provided his powerful group with the chance to realise the goals of their unrelenting ideological agenda.

George Soros: We’re now in ‘revolutionary moment’ that allows us to achieve the ‘inconceivable’

In a new interview, the left-wing billionaire called the coronavirus pandemic ‘the crisis of my lifetime.’

Left-wing billionaire George Soros has indicated that the coronavirus pandemic paves the way for societal changes previously thought impossible, calling it “the crisis of my lifetime.” Soros had lived through the Second World War as a youth.

“Even before the pandemic hit, I realized that we were in a revolutionary moment where what would be impossible or even inconceivable in normal times had become not only possible, but probably absolutely necessary,” he said during an interview on May 11.

He was “particularly concerned about the survival of the EU because it is an incomplete union.” While, according to the Hungarian-born billionaire, the European Union was “in the process of being created,” that process “was never completed.”

Austin Ruse, President of C-Fam (Center for Family and Human Rights), provides a list of the billionaires supporting far-left causes. It is a cause for satisfaction that the subversive activities of the malignant obscenely rich George Soros are brought increasingly before the public eye. But there are others working collectively to destroy the moral and political foundations of Western Civilization. 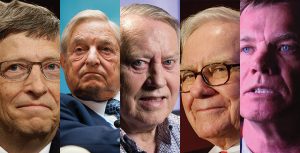 You have heard of billionaires Bill and Melinda Gates. You’ve heard of Warren Buffet and George Soros. But have you heard of Chuck Feeney? Tim Gill? How about John Styker.

Each are hard-left billionaires who have targeted the family, and the unborn at the UN and on the ground around the world.

Fact: Bill and Melinda Gates are spending hundreds of millions to spread dangerous contraceptives throughout the developing world, especially targeting Catholic communities in African. They are a driving force at the UN. Melinda Gates says she is a faithful Catholic.

Fact: George Soros, worth $23 billion, has given hundreds of millions of dollars to anti-life and anti-family groups active at the UN, including Catholics for Choice, NARAL Pro-Choice America, National Organization for Women, Planned Parenthood and many more.

Fact: Chuck Feeney single-handedly funded the campaign in Catholic Ireland to legalize homosexual marriage. Right now, he is spending millions to overturn Ireland’s pro-life law, one of the last countries in the world to fully protect the unborn child.

Fact: Warren Buffet has contributed more than $1 billion to pro-abortion groups. Buffet has an especial fondness for the “inter-uterine device”, a nasty piece of plastic that renders a woman’s womb hostile to the unborn child. Warren Buffet also funds something called “Mifepristone”, a highly dangerous injectable contraceptive used on African women.

Fact: Billionaire Tim Gill spends millions in support of radical LGBT groups working at the UN to advance a wicked agenda. These groups are not merely looking for “nondiscrimination”. They are gunning for dominance. They are working toward burning down the authority of the Catholic Church.

In a post on his website about 18C of the Racial Discrimination Act, Cory Bernardi focused on the malignant influence of billionaire Marxist George Soros on Australia through the Alinsky/Marxist group GetUp! Bernardi quoted from Jennifer Oriel, one our foremost analyst of Australia politics and society.

In perhaps the biggest political scandal since WikiLeaks, a group of hackers has dumped hundreds of files exposing the influence of socialist billionaire George Soros on Western politics. END_OF_DOCUMENT_TOKEN_TO_BE_REPLACED