I intend to re-post on this website some of the comments and essays I had posted on another website (they are no longer there). These are comments and essays that I consider important for the understanding of and application of Edmund Burke’s thought. As it turns out, the present commentary coincides with yet another display of treachery by members of the Liberal Party. 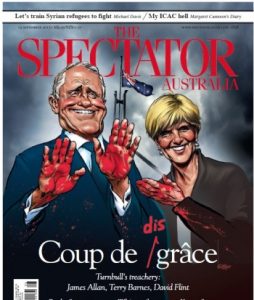 END_OF_DOCUMENT_TOKEN_TO_BE_REPLACED

Tuesday September 13 was the Ides of September and the first anniversary of the secret meeting of Liberal Party conspirators at the house of MP Peter Hendy. The feature of that meeting of treachery was that the leading conspirator, the beneficiary of the conspiracy, was not present. He was comfortably ensconced in his harbour-side mansion sipping a Glenfiddich while awaiting a phone call from his underlings. The next day, Wednesday 14 September, was the first anniversary of the coup, the culmination of five years’ planning (according to Fairfax journalist Peter Hartcher) that deposed first term Prime Minister Tony Abbott and fulfilled Malcolm Turnbull’s desperate non-negotiable ambition of becoming prime minister of Australia.

A generous person may hope that Malcolm Turnbull derives the full measure of satisfaction from his self-centredness, his ruthlessness, and his ungovernable ambition. The rest has been a disaster – a disaster for the Liberal Party rent from top to bottom and a disaster for many of Turnbull’s co-conspirators whom an execrating electorate booted from the political arena. END_OF_DOCUMENT_TOKEN_TO_BE_REPLACED